A couple of weeks ago, during the prolonged spiral of illness at my house, my daughter discovered the movie Ella Enchanted and rewatched it daily for the duration of her fever. When I asked her whether it was too scary for her little brother, she said, “Well, it does have a bad guy in it. He doesn’t look scary, but he’s a sneaky bad guy…and those are the worst kind!”

In the weeks since then, I’ve developed a healthy respect for sneaky weather systems, as well. Winter has finally arrived, and we’ve been clobbered repeatedly (and happily, for the most part) by snow storms that weren’t meant to amount to anything…but did.

This morning is just the latest example. I bundled up the kids in their winter boots, tucking their tennis shoes into their backpacks, and hurried them out the door for our blustery walk to school only to discover, as my littlest guy hit the street and instantly landed on his backside, that the “isolated flurries” had gathered momentum, coating everything with a layer of extra-slippery powder. And it was still coming down. In fact, the further we walked, the whiter the air became until we were struggling to see where the un-shoveled sidewalks gave way to the road. Our eyelashes were flocked…and our hats and our gloves. And the kids were laughing as we walked into the wind.

I’m pretty sure I once saw something like it in an episode of Little House on the Prairie.

After delivering each of them to their classrooms, I paused in front of the double doors to contemplate the dizzy swirl of snow, and I deliberated whether to forge ahead with my usual morning walk along a trail that winds for almost exactly 10,000 me-sized steps, or whether to pick my way home immediately and get warm. You might think this question should not have presented itself as a question at all: Anyone in her right mind would have walked home, drawn a bath, and congratulated herself for having a warm, empty house on a snowy morning. Clearly. However, sometime during the past ten years, my husband seems to have persuaded me of the (possibly foolhardy) value of discomfort and the (dubious) honor of being tough. So off I went, foolhardily cold and dubiously tough, earbuds in place, hat pulled low and collar pulled high, into the sneaky mini-blizzard.

The walk had its moments of stark beauty–as when a red-tailed hawk swooped spectacularly low  over the trail just ahead of me–but, mostly, I froze my hiney off and fantasized about the cup of coffee I would make as soon as I returned to my blessedly empty, cozily warm house on a snowy morning.

In an hour’s time, I made it home, and I made the cup of coffee. And the contrast between the sharp cold of the outdoors and the creamy warmth of that cup rendered every step of the walk worth it.

I can’t contend that this is a true recipe, but it is a true friend: I drink at least a couple of cups this way every day, so it accounts for a frightening percentage of my daily caloric intake without contributing any actual nutrition, but it also makes me happy, so I’ll defend its role in my daily routine.

It relies on one of my favorite possessions:

A milk frother of the low-tech variety. I’ve owned about ten of these in the last five years because I kept breaking them…until I discovered this particular model which is glass-free and also free of bolts and screws and metal coils, which tend to get gunky and/or broken. Amazon tells me that I bought it more than a year ago, and it’s still in perfect working order!

I believe you could put almost anything in this frother, aerate it, and improve its mouthfeel and flavor. That said, this is what I put in mine: 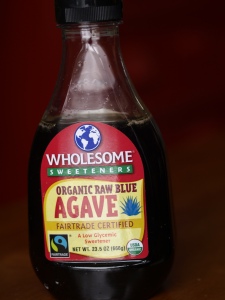 I stir it all up and put it over medium heat until it’s simmering. 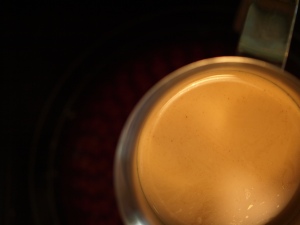 Then I pump the handle up and down several times and let it sit for about 30 seconds (to allow more of the liquid to settle out of the froth) before pouring it into my mug. 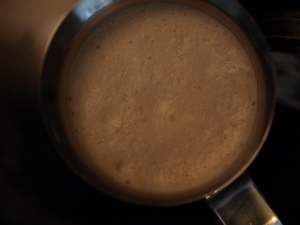 Then I drink it.

Come visit me, and I’ll make you a cup!

P.S. Not snowing at your house? When it’s not cold outside, these are just as good on ice! 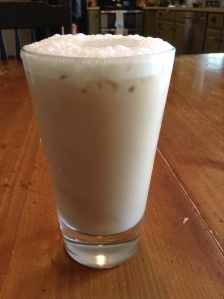 I’m so boring. I don’t say that to be charmingly self-deprecating. I’m boring, and I like it that way. I might even say I’m proud to be boring. Still waters run deep, you know. Or so they say.

Left to my own devices, I believe I’d conduct every day in almost exactly the same way. I’m not in a rut, though: I’m in a groove, and my sweet little domestic life is downright groovy. So many examples of said grooviness come to mind that it’s difficult to choose, but here is one I hold dear:

Every week (usually on Monday mornings, as he empties out the coffee grounds from his first pot and begins brewing a second pot for me) I ask my husband if he has any “requests for dinner this week,” and every week, he says, “Well, soup, of course.” And I say, “Any particular sort of soup?” He seems to ignore me, wandering off to continue his own groovy morning routine, and then, 30 minutes or so later, as he bundles up on his way out the door, shouldering his leather messenger bag, fingering the back of his collar to check that it covers his tie, he rattles off about three or four different possible soups–no segue to prepare me for the list, just a list. And then a kiss. And then he’s gone.

I told you it was groovy.

This soup is one I’ve been making for so many years now that it’s less a recipe than it is a household tradition. I remember making it in my now-husband’s tiny apartment in about 2002–an apartment whose galley kitchen boasted approximately 16 square inches of counterspace. It was good then, and it’s still good now. Few recipes have survived un-tweaked so long in my repertoire.

I know everyone under the sun makes a version of tortilla soup, and I’m not sure this one distinguishes itself in any way except that it is ours, tried-and-true, brothy and a little smoky, as spicy as we want it to be in any given week but no spicier.  It provides a perfect receptacle for the what’s left of the bird after a previous night’s roast-chicken dinner; it offers the ideal way to employ an almost-forgotten avocado left sitting on the counter a half-second too long. Made up almost entirely of pantry staples, it comes together in less than half an hour and requires virtually no chopping. This soup easily expands to feed a crowd at birthday parties and keeps well to serve for lunchtime leftovers. It’s customizable with all our standard Tex-Mex toppings, so everyone gets just what they want. Have I gone on long enough? We just love it.

(This is the version that feeds a small crowd.)
Chicken Tortilla Soup

2 tablespoons of oil
2 onions, chopped
5-6 fat cloves of garlic, minced through a press
2-3 tablespoons chili powder
1 tablespoon cumin
a good bit of salt (to taste)
3 cans of tomatoes, with their juice (I like fire-roasted tomatoes here, but regular ones work)
3 chicken breasts, poached and shredded, or the shredded meat from a rotisserie chicken
2 cans black beans, drained and rinsed
1 can corn, drained and rinsed
1 can hominy, drained and rinsed
8 cups chicken broth
Toppings
tortilla chips
shredded cheese
chopped avocado
chopped green onion
sour cream
lime wedges
Directions:
1. Chop your onions and saute them with the garlic in oil over medium heat until soft but not browned. Add the spices and stir until fragrant and toasty.

2. Empty all of your cans (not the tomatoes) and rinse their contents in a mesh strainer. 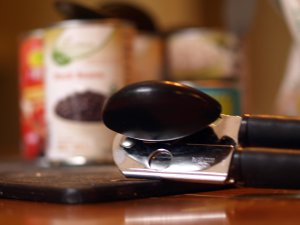 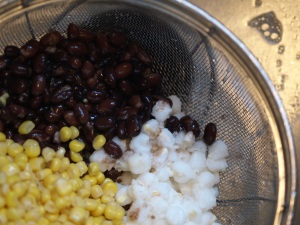 3. Then add them and everything else into your pot and simmer until you’re ready to eat.

4. Serve with your favorite toppings.

Repeat approximately once each month for the next 10-15 years, and then consider it your own. 🙂

This month has whirred by, a chocolaty blur of birthday cakes and cream-filled hearts, a fevered haze of Fifth Disease and ear infections, a flurried blitz of graded essays and Common Core standards. In other words, the last month of my life has been just exactly like my life as combination stay-at-home-mom and work-at-home-teacher…only more so.

We’ve been eating pretty well, I think, given the fact that most days at least one of our smaller members has spent dinnertime on the couch whining for popsicles, but I haven’t taken many pictures of our dinners-in-progress. Some weeks, I’ve grocery shopped with two puny kids in the basket of the cart and all the groceries crammed in the the seat and balanced on the tray beneath. To be honest, I’m ready to declare that a new month begins now, on February 15th, and maybe the month ahead will bring hot cocoa and snow days, crisp walks to school with the kids dashing ahead, evenings on the couch watching crime TV, and written proof of our daily existence.

Although I didn’t take many photos of our food, I did snap a few shots of my oldest child on his birthday, getting ready to tuck into what he calls “Mommy’s special chocolate cake.”

If you look closely, you can see the cake at the bottom of the image, but first you’ll have to stop marveling at the size of those crazed brown eyes and trying to determine what in the world he has on his head. That’s a Viking helmet that is just a smidgen too big for his noggin and a knit cap underneath to make it stay put, and, yes, he is trying to look insane. It’s one of his favorite tricks. See, this is what he looked like just a moment later, when his inner joy got the best of him:

The glossy cake in front of him originally sported 8 candles, but he’s already licked the frosting off of a few of them.

I can’t claim the recipe in any real way, except to say that I took the frosting from one cake recipe and the cake from a different one. So I’ll call it a remix, which means I can assume a modicum of credit.

I’m pretty sure that I gain 5 pounds every time I think about making this cake, but it’s totally worth every ounce. This is the most lickable frosting in the world. It’s like painting your cake with a thick layer of shockingly shiny fudge. The cake beneath it might be plausibly considered beside the point, but why write it off? This one is tender and springy and absurdly easy.

If you decide to make it, you should go ahead and claim it, too! 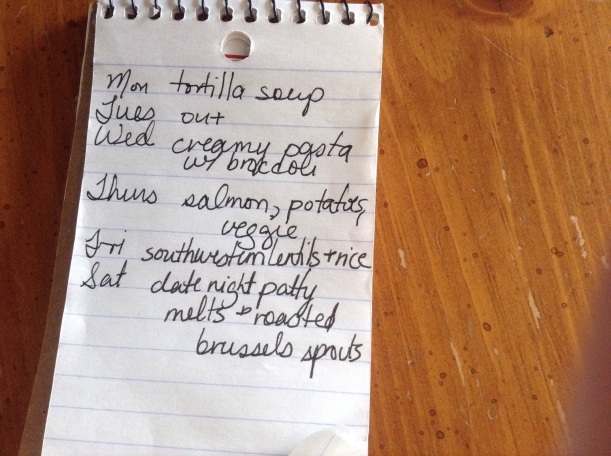